The Switch is happy to host Amy Berkowitz from San Francisco and Portland's own Ashley Toliver. 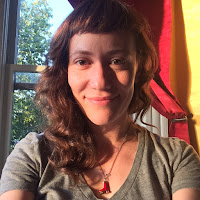 Amy Berkowitz is the author of Tender Points (Timeless, Infinite Light, 2015). Her writing has appeared in publications including Dusie, Textsound, and Where Eagles Dare, and on the VIDA blog. In 2014, she was a Writer in Residence at Alley Cat Bookstore & Gallery. She lives in a rent-controlled apartment in San Francisco, where she is the founding editor of Mondo Bummer Books and the host of the Amy's Kitchen Organics reading series.

Ashley Toliver is the author of IDEAL MACHINE (Poor Claudia, 2014). Her poems have appeared in Caketrain, Front Porch, PEN America and Third Coast, among others. A Cave Canem graduate fellow, she currently lives in Portland, Ore.

▲
One of the most persistent lies is that boys are angry.

And the shadow lie: that girls aren’t angry.

But even though we aren’t formally trained to hate like boys are, every girl is a natural expert:

We have so much to hate.

▲
To google yellow wallpaper and find

melodies. The light ends a pattern we learned to stupefy by motion or admitting away. A

statutory list puts the blame on the hour. You move as I move, whistling measures in salt

grass, patient and guarded processions. At night, the line is a current to wade through: older

names sifting past the flotsam, the water rising up to here.