Poet and cartoonist Gary Sullivan has been translating the work of Austrian schizophrenic Ernst Herbeck for the last 10 years--a side project to the polarizing flarf movement that he gave name to in 2001. Everyone Has a Mouth, a selection of more than two dozen of his translations of Herbeck's poems, was published earlier this year by Ugly Duckling Presse. He writes about immigrant culture for opencitymag.com and international music at bodegapop.com. 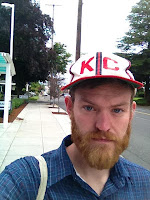 Drew Scott Swenhaugen was born in Minnesota. He is editor of the chapbook press Poor Claudia, contributes in book design for Octopus Books, and co-curates the Bad Blood Reading Series in Portland. Occasionally he contributes to the Tin House blog as well as the The Volta, a website of contemporary poetics. His work has appeared or is forthcoming in places like Shampoo, Weekday, Redivider, Lungfull! among others. He is an MFA candidate at the Vermont College of Fine Arts, and cannot wait for the multitude of job choices he will have to choose from after his degree is completed.

The Rhino.
by Ernst Herbeck, trans. by Gary Sullivan


The rhino is completely quiet in the woods.
The nose on high and does also
cause such pain.
That always causes such pain and does usually
does not hurt.
more than the animal so huge is it also
the rhino is a huge animal.
The rhino in the woods.
so jagged is the rhinoceros
and yet so fine.

from LIFEY
by Drew Swenhaugen

I’m going to go whistling on by this time. No touching
everything in my path. Not this time.
You can call me homey, although it sounds like you called me
homeless, which is fine. I don’t mind if we portray me like that.
You are not too good for your home, which you should not be ashamed of,
not in the least. I like that in you, which makes me leave mine.
The fact that you call me homey is determinant upon another fact :
that I am no longer a close emotional or sexual companion to you,
which is also fine. I guess it’s fine. I’ll act like it’s fine for you.
But when I go whistling along, and you ask what’s up homey,
you must expect me to keep walking, or else I’ll stop
to realize that every single moment has been in vain.
If you tell me to keep walking, I’ll say okey dokey.
And when the rain comes, I’ll pray that the rain forgets
that it’s actually rain. Which is also fine this time, I now must say.
Although I wish I had a jacket, if it’s going to keep raining like this.