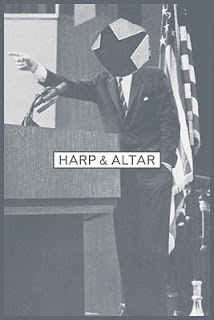 This Saturday, please come on out to Switchyard Studios, where we will host a celebration for the magazine Harp & Altar. Poets Jesse Lichtenstein, Zachary Schomburg will read, as well as fiction writer Michael Zeiss.

Alina Estelle Hardin will play and sing for us, and as usual we will have wine, beer & snacks for your faces. Feel free to bring your own drinks, and remember to tip your partytender. Join us for The Switch!

Zachary Schomburg is the author of The Man Suit (Black Ocean 2007), Scary, No Scary (Black Ocean 2009), Little Blind Thing (Poor Claudia 2010), a dvd of poem-films, and the forthcoming Viking (McSweeney's, 2012). He lives in Portland where he co-edits Octopus Books and Octopus Magazine.

Michael Zeiss, a former resident of Portland, recently returned to the city after a decade in New York. A consultant for non-profit organizations, he spent five years at the American Red Cross working with people affected by the attacks of September 11. His fiction and criticism appear regularly in Harp & Altar.

* Founded in 2006, Harp & Altar is a Brooklyn-based online literary magazine edited by poet Keith Newton and novelist Eugene Lim. In its short tenure, Harp & Altar has emerged as an important new source for innovative and risk-taking literature, publishing poetry and fiction alongside criticism and reviews of writing and art. The Harp & Altar Anthology, featuring a selection of poems and stories from the magazine’s first three years, was published in 2010 by Ellipsis Press, and new issues continue to appear twice a year at www.harpandaltar.com